The Design of Everyday Things 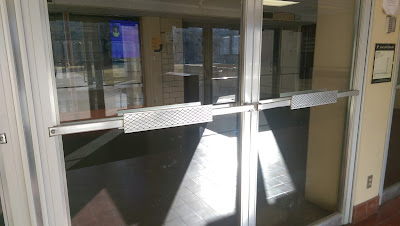 Have you ever approached a door that you thought should be pushed when actually it needed to be pulled? The design elements of the door suggested the wrong functionality. The door pictured above opens into Kansas State University's Cardwell Hall. The flat panel suggests that the door is to be pushed, when actually the door needs to be pulled in order to open. When first encountering this door, I routinely made the mistake of pushing. Lot's of people do. Even when taking the picture above, I witnessed a student attempting to open the door incorrectly. In the design world, this is known as a Norman Door after Don Norman; cognitive scientist, usability engineer, and author of The Design of Everyday Things.

Encounters with Norman Doors can be frustrating and even embarrassing as you falsely attempt a simple and routine action. But are you at fault or is the design? In The Design of Everyday Things, Don Norman proposes the fault lies not on us but in design that ignores the needs and psychology of people. Norman is an advocate for people-oriented design which when followed, can make things more understandable, usable, and enjoyable. Below are 3 of my greatest takeaways from the book which I hope to incorporate into the projects I develop as a software engineer. 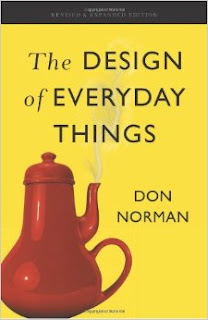 1) Discoverability And Understanding...
...are two of the most important characteristics of design according to Norman. "Discoverability: Is it possible to even figure out what actions are possible and where and how to perform them? Understanding: What does it all mean? How is the product supposed to be used?" (page 3). The doors entering into K-State's Cardwell Hall are an example of when discoverability fails. The doors open inward, so there should be a handle for patrons to pull, not a panel to push.

Below are some questions regarding discoverability and understanding that I would be concerned with as a software developer creating user interfaces. The best input would come from potential users.

2) Designing For Error...
...is just as important as designing for when things go as planned. Norman heavily emphasizes why this is so necessary for safety. He cites several examples from manufacturing and aviation where poor design can lead to error and cause serious harm. It'd be easy to only consider the situation where everything goes right and the user only performs actions as intended, but users aren't perfect.

Imagine if when you deleted something from your computer, the computer immediately deleted that item forever. It didn't ask you to confirm that you really wanted to delete it. It didn't put the item in a trash can where it could be recovered. The item would be permanently gone. There would be no room for you to make mistakes as a user. Today, there are several design decisions that developers make to help users avoid errors such as accidental deletion. Below are 4 tips from Norman on designing for error that I plan to keep in mind as I develop software applications.

...begins with solving the correct problem. Norman claims that good designers don't start by solving the problem they're given. Rather, they observe and study people to understand why the problem exists in the first place. Norman defines Human-Centered Design as, "the process of ensuring that people's needs are met, that the resulting product is understandable and usable, that it accomplishes the desired tasks, and that the experience of use is positive and enjoyable" (page 219).

Pictured below is the Iterative Cycle of Human-Centered Design. "Make observations on the intended target population, generate ideas, produce prototypes and test them. Repeat until satisfied" (page 222). Good design involves repeated study and testing. Each time the cycle starts over again, observe the design elements that worked and those that failed then begin the process again. Consider failures as learning experiences and an essential part of exploration and creativity. With each iteration, the solution will become clearer and more defined. 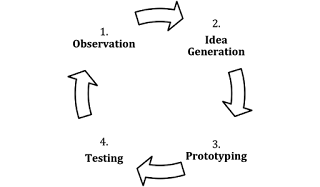 I hope you enjoyed reading about some of the things I learned from The Design of Everyday Things, which I highly recommend. There's a great deal to learn even beyond the 3 points above. Don Norman's teachings will forever inform my work as a software developer.

Popular posts from this blog

I love finding a good couch co-op game to play with friends and family. Over this winter break, I've enjoyed many hours of Overcooked with my dad and younger sister. In Overcooked, 1-4 players are chefs in a kitchen working together to prepare meals. The objective of each level in Overcooked is to serve up as many orders as you can. Each order requires different steps to prepare like chopping up vegetables or cooking meat and then all the ingredients need to be brought together and served. Each level has 3 stars to earn which is determined by your output. The more chefs in the kitchen, the higher the output that is expected of you. This means that cooperation is a must. One of my favorite things about the game is how easy it is to pick up and play. My dad and younger sister were effective in the kitchen nearly immediately. The difficulty comes from learning the kitchen. Each level has a unique setup and some of them are even dynamic as parts of the kitchen break apart and
Read more

NPR One has become a part of my daily routine. When I wake up in the morning, I tune in as I get ready for work then again when I make it back home to fill the time until dinner. But what is NPR One? Essentially, it's an audio app which provides a continuous stream of all the content NPR has to offer. What's really great about the app, is how it makes public radio personal (as the tag line suggests). The continuous flow of content is tailored for the user. There are two components. First there's the national hourly newscast and local news which play periodically throughout the day. Your local news can be setup by choosing a local station (for me in Manhattan, KS it's great being able to tune into KCUR Kansas City). If you're like me and don't have the app on all day, when you start it up, the app automatically starts with national and local news. The second component is the content which interests you. From news stories to podcasts, as you're fed conten
Read more

Thinking back, two of the games I most enjoyed collecting every trophy (including the platinum) are Batman: Arkham Asylum and Batman: Arkham City. Simply put, I thoroughly enjoy the minute to minute gameplay in Rocksteady's Batman games. Traversing through the map, taking down bad guys, and playing detective feels great and most importantly is great fun. Thankfully, all that has made the Batman games great is back and even better in Batman: Arkham Knight. When Arkham Knight was announced, I was most excited to see that it was not coming out on last gen consoles because this was going to be one of the first games to truly be built from the ground up on current gen consoles so everything could be turned up to 11. After the game has come out, that's largely true. One thing I really appreciated about the game is that (at least on hard mode) there was no tutorial what so ever. The game wastes no time and jumps right in. The graphics are a delight. Combat feels even tighter an
Read more